My ride today started off much like all my other rides.  The weather was a little better than normal and being at the end of a recovery week I was feeling a little stronger than normal.  It was nice to only run for an hour yesterday instead on two.  The wind wasn't in a good direction to PR the loop but I decided I would ride a little harder than normal.  Once I got going, all the random stuff started going through my mind like usual.  If you've ever run or rode for more than an hour, you know what I'm talking about.  Today was no different.  I ran sound at church today, so the songs were going through my head, then I started thinking about what I was going to cook, then about the week ahead at work, then 9/11. 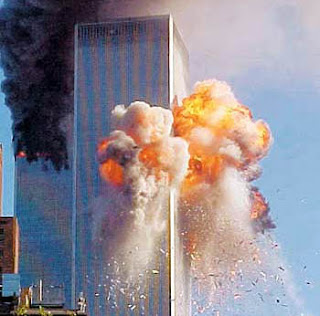 No big deal at first.  I remembered where I was, what I was thinking, etc.  Then I started thinking more about it. I was thinking the firefighters had a hard day ahead of them, but they are studs and that's what they do.  Instead of going into a burning house and saving people, they first had to climb 90 flights of steps carrying a hundred pounds of gear, then start saving people.  It was going to be a long hard day for them, but at the end of the day, they would be home having a nice meal with their family before going to sleep exhausted.  I never once thought the towers would collapse.  I never once thought people would start jumping out of the buildings.


The more I thought about 9/11, the sadder I became and the harder I pedaled.  I was thinking to myself that I really don't know what hard is.  What the emergency personnel did on 9/11 was hard.  Riding my bike is not hard.  I am so fortunate to be free and about half way through the ride I decided to dedicate the ride to the emergency personnel that responded on 9/11.

Despite multiple traffic stops and unfavorable wind, I did PR the ride....
Posted by Ransick at 9:48 PM

One of my strongest rides last year was when my mind took me to places that made me realize how fortunate I was to be ABLE to ride.

Great job on your PR.

Interesting how the mind can take you places your body normally doesn't. Nice post Mike.

Thoughtful post, Mike. Agree, all sorts of things go through the mind on solo rides.

Great ride. And yeah, perspective is a real gift.

I was at work (secretary at the time, not teaching) that day and watching, and one of my coworkers said something about the towers falling. I said, almost scornfully, "It's the World Trade Center. It's not going to fall." Even watching as events occurred, I just had no concept of what was possible.

What a great perspective. You're right; most of us don't know what hard is.