Another pretty solid year of training is in the books.  I log on beginner triathlete which makes it easy to compare year over year and generate cool graphs like the one below.  If you haven't been to the site, check it out and consider joining a mentor group, new ones are open now.  They are a great way to get training and nutrition questions answered as well as make new friends with similar interests.

Anyway, I rode bike bike on the trainer 14.38 miles this morning to hit a nice round 2500 miles for the year. 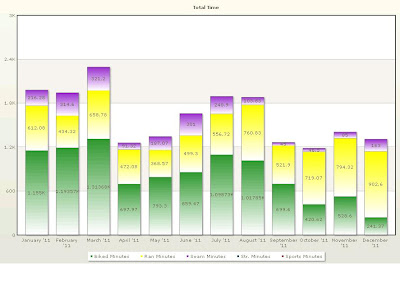 
I like the way Jeff looked at his averages so I'm going to copy his idea.  My training averages were:


Those numbers don't look too bad (except for the swimming).  Let's break them down further.

So there you have it.  My third year of endurance sports in the books.


Happy New Year everyone!
Posted by Ransick at 3:32 PM 15 comments:

I had a draft blog post about goals for 2011 and never finished it.  I didn't have many and I didn't review them at all.


So my A race goals were met, while my general "get faster" goals were not.  This reminds me of the quote "A goal without a plan is just a dream".  I went looking for the author of that quote and didn't find it.  It may be a variation of this quote.


A goal without a plan is just a wish. - Antoine de Saint-Exupery

I had a solid plan for NOLA and exceeded my goal despite my nutrition failure.  I'll follow the same plan for my HIM this summer.  I'm thinking about changing from Racine, WI 70.3 to the Door County, WI HIM one week later.  I think the course will be much prettier.

On an unrelated note, we had our first snow today.  Now Spring can arrive :-). 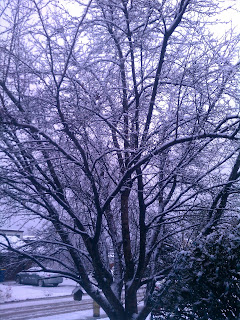 I've decided against a full Ironman this year.  It was actually a pretty easy decision once I went through the checklist I created.

Step 1 - Catch the bug.  Check!
Step 2 - Spousal approval.  Check!
The conversation went something like this:

Me: "Honey, I'm thinking about doing something crazy like Ironman Canada with Len"
DW: "Do whatever you want, I'm not going"

She is actually much more supportive than that.  The race is the beginning of preschool for her, so she can't really leave for a week.

Step 3 - Take the time off work. Check!
This one was actually a little tough.  I already have 20 days of vacation planned next year (I get 19).  I was going to borrow a week.

Step 4 - Come up with the cash.
Well, I don't really have money laying around, but could find a way to "fit" this in.

Step 5 - Equipment - Maybe.
I could do a full on my road bike, but I would really like to get a tri bike before I do a full. I still ride in mtb shoes too :-).

Step 6 - Physical Inventory - Fail :-(
My swim volume is about half what it needs to be (maybe more).  I never swam for anything other than fun until three years ago (and I was a slow learner!).  Two years ago, I did about 60k yards before my shoulders stopped cooperating.  This year I did the minimum necessary (70k) to complete a HIM so as not to re-injure them. So this year, my goal is to bump my swim volume by 2X and see how my shoulders feel.  Besides the shoulders, I had nutrition failures on the two HIM's I did this year.  I definitely need to learn how to take in more calories before I attempt a full.

Speaking of funny Ironman thinking, check out the six phases of bragging about becoming an Ironman that I will have to postpone.  Funny Stuff.

Tagged - Random Things About Me

I got tagged by TriMoEng over at Climbing Those Hills so I'll try to post a few random things that most of my blogger friends don't know.

1.  I love to grocery shop.  If you follow my blog or follow me on twitter, you know I love to cook but I also love shopping for all the food.  I was a produce clerk in high school and loved it.  Ever since then I've always loved the smell of grocery stores, specially in the morning and I love picking out produce.

2. I love to drive and I drive fast.  When traffic is light enough that it's safe to drive fast, I take advantage of the situation and get the adrenaline flowing. It's not uncommon for me to make a several hundred mile trip and never be passed.  I usually don't let anyone else drive on trips because I like driving and get bored just sitting in the car.

3.  I have trouble throwing things away.  Serious trouble.  For example, I have jars of all the old screws, bolts, nuts, eye hooks, etc from all the projects I've ever done.  These items aren't sorted or anything so they aren't real useful. I usually end up going to the store and buying new ones.

4.  I'm an electrical engineer and computer geek.  I used to be a big gamer too, but other hobbies have replaced the gaming over the last 5+ years.

I decided to do XLMIC's Jingle Bell Hell run today and take a few pics.  Here are the rules:

Hell is that I "had" to run 1.5+ miles on the road to reach beautiful single track because I was "too lazy" to drive there.  How ironic is that?

Anyway, here are some unflattering pics from my run.

I totally stole the Santa hat idea from TriMoEng.


I started this post November 9th and have been so indecisive, I'm just now posting it (and I'm still not done......). I almost titled this post, "I Still Haven't Found What I'm Looking For" since I can't find an early season 70.3 that really works for me. I also feel like a slug when I re-read my off season plans. Without a big race scheduled, I just don't have the motivation to get on the trainer (that is changing today!).  I have been running 18-20 miles a week, shy of my 30 mpw goal, but way better than being a couch potato.

I'm struggling to get my 2012 race season scheduled.  I would like to do a 70.3 or two and would really like to do a full Ironman.  My cousin Len is doing IMC in late August.  He has been a big inspiration for me getting in to triathlons, so it would be really cool to do IMC with him.  The hitch is it's 2000+ miles away and sold out except for foundation slots, read $1200 entry fee (I need a sponsor :-)).  There is another full Ironman that same day in Louisville Kentucky which is about 6 hours from my house.  It isn't sold out, but the downside is the heat and humidity (and it's not as beautiful as BC).  It's been in the mid-nineties many times making the marathon a death march.  Yet another choice is Rev3 in Sandusky, OH which is about 9 hours from my house.  I haven't given up on doing an IM this year yet.  I'll decide by January 1st.

The folks at Zippfizz asked if I would do a product review of their energy drink.  I've been getting tired in the afternoon after lunch wears off so after checking out their website and seeing it contained only 10 calories, 0 grams of sugar and a bunch of vitamins, I thought why not give it a try.  I received the water bottle plus sampler pack last week while out of town and decided to try it this week.  The product comes in a powder you mix with a 16 ounce bottle of water. 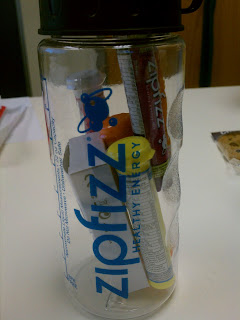 Today after lunch I tried the citrus flavor and the taste was pretty good.  I didn't notice any huge changes (no racing heart beat or jitters), but I did notice I didn't run out of energy at all.  I also felt slightly more alert.  After 4-6 hours, I still felt just fine, no crash at all.

You can check them out on twitter, facebook, their blog, and their website. It's also available at Walmart and Target (according to presentation they sent me).  If you are looking for a last minute unique gift idea for an athlete, check them out.


(Disclaimer: I was sent this product for free to review on my blog - courtesy of Zippfizz corporation.  I did not pay for the item, receive payment for this review, or agree to give a positive review. Aside from information gleaned from the company website, the opinions are my own.)


(Disclaimer #2, I borrowed the above disclaimer from Kovas's blog.  He does a ton of product reviews)

I signed up for a secret Santa gift exchange this year over at Jill's blog.  Cheryl thinks it's strange that I have a secret Santa over the internet.  Oh well, I don't get Pinterest either :-).  Anyway, I received my gift today, the travel size version of "The Stick", thanks! 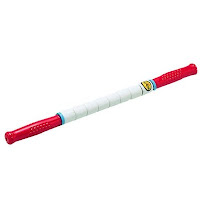 I was seriously considering ordering one of these for when I travel to help with a recurring knot in one of my calves, so it's perfect!   I didn't get a note revealing the senders identity, so whoever sent it, thanks!

I'm still working on getting my package together to mail out to the lucky person that drew my name :-).

As I write this post, I'm on my way back to Brazil.  Door to door, it will take about 22 hours including a 5 hour layover in Miami.  It's a long day/night to say the least.

Continuing on from my last post of South America, I walked into town after visiting the Hard Rock Cafe in Belo Horizonte.

I came across a small Pizzeria with outdoor seating and decided to stop.  It was a nice little restaurant and no one knew English so I pointed to something on the menu. 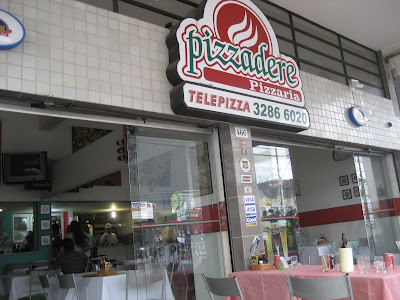 While waiting for the pizza I noticed the delivery vehicle. This is a dangerous job with the way people drive here. 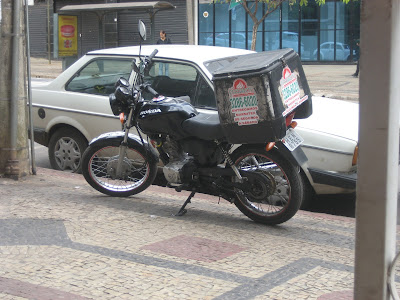 Once my pizza arrived I was surprised to see corn on it, but it was delicious! 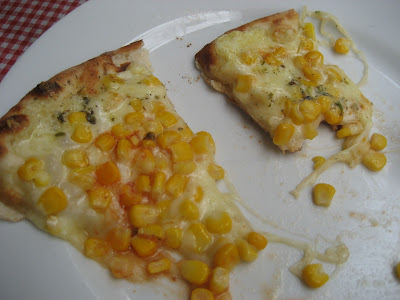 Walking back to the hotel I came across a little grocery store. 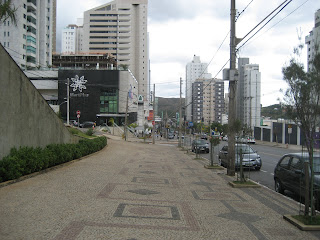 They had a small ensemble playing music that was nice.  They also had beer tasting. The beautiful young women handing out the beer didn't know any English and I don't know Portuguese, but I managed to get a couple samples. 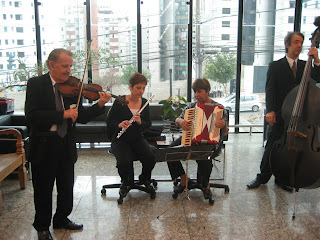 I ended up just buying some water.  I didn't have any small bills when I checked out and the cashier didn't have much change.  I'm pretty sure she called me stupid in Portuguese :-)