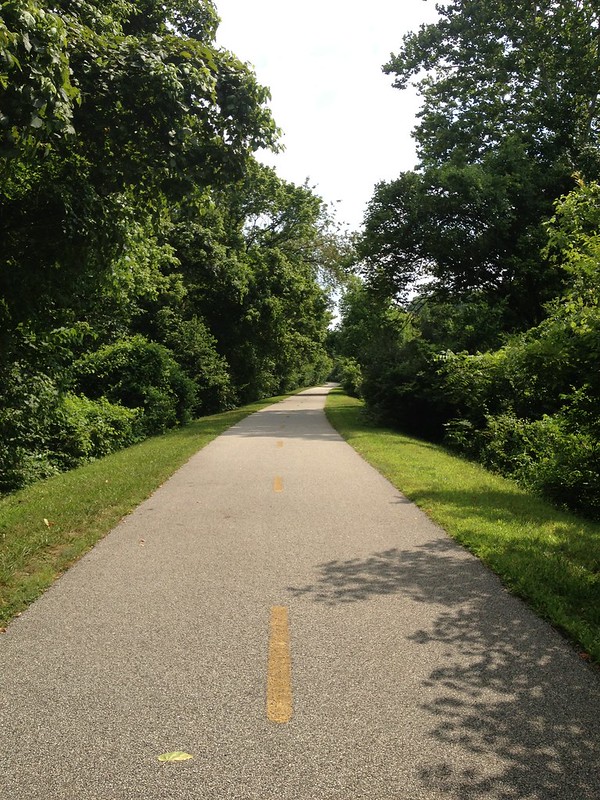 The mileage is getting up there and it was hot and humid this weekend. The runs were fine but slow so I could keep my HR down. Here are some pics from my runs. 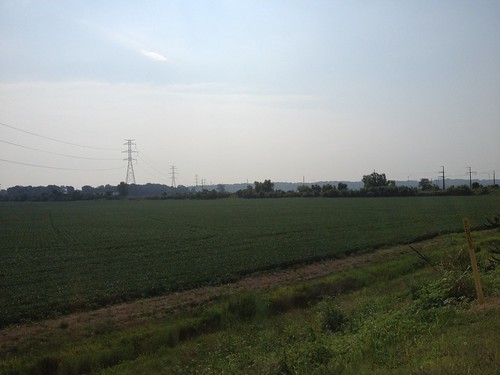 The pic below was a brutal 3 mile stretch with no shade. It was in the mid 80's with humidity in the mid 70's. 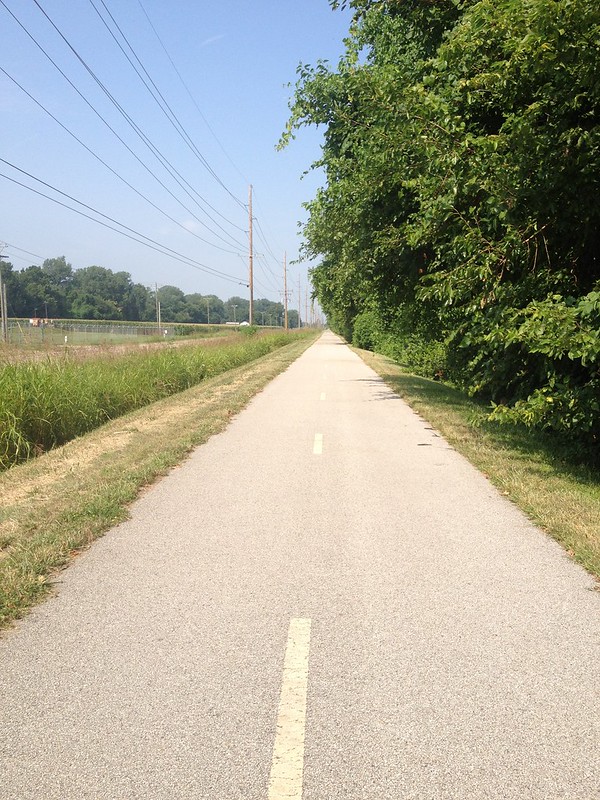 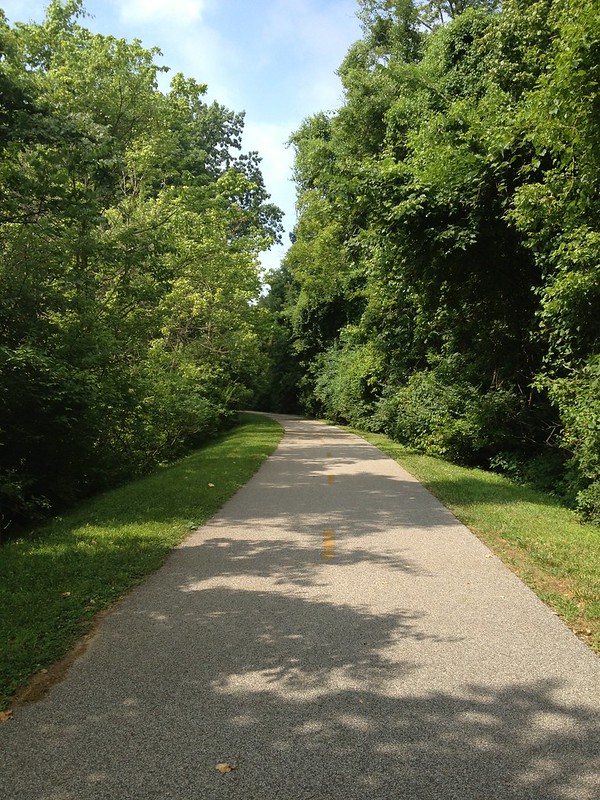 Made the best lamb chops yet after the 16 miler. It was just my son and I for dinner, so not much food. 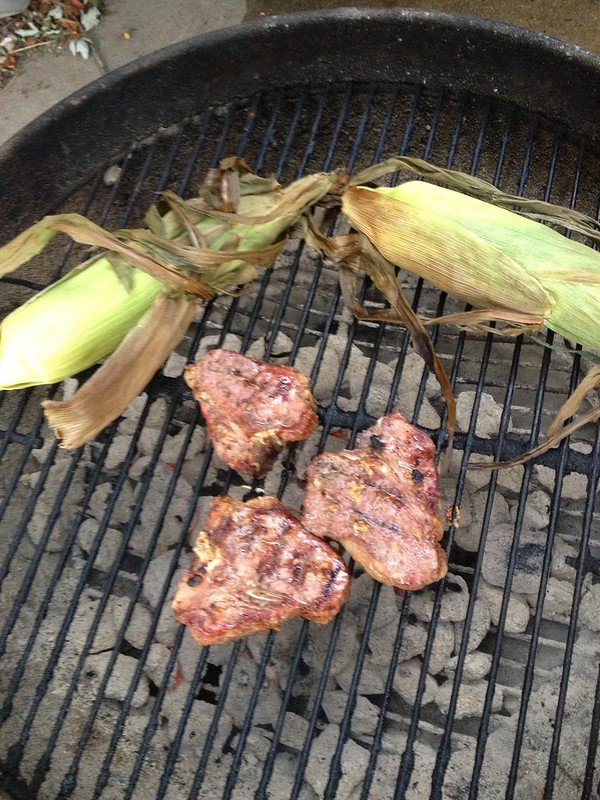 Haven't looked at my plan for next week yet. Stay tuned!

Posted with Blogsy
Posted by Ransick at 8:13 PM 6 comments:

In other news, my kids are back from Europe! My daughter was there for 5 months studying and traveling. My son went over for the last three and a half weeks to travel with her. They had a blast!

Both had eventful trips on the way there. In February, the first leg of my daughters flight was cancelled due to the winter storm in DC. She cancelled her flight and booked a different one going through Chicago. Made it to Chicago, then Zurich, then when flying from Zurich to Hannover, her plane lost an engine and they had to return to Zurich. She then had to take two more flights to get to Hannover and her luggage showed up four days later.

My son was supposed to fly St. Louis to Chicago to Frankfort to Berlin but his first flight was cancelled. American Airlines put him on a flight to Dallas with no guaranteed seats past Dallas. He then flew standby to Dusseldorf and standby to Berlin where my daughter met him. Nice solo travel adventure for a boy that is going to be a senior in high school :-).

My daughter made a cool video of their trip. It's really nice having them back.

Posted with Blogsy
Posted by Ransick at 9:52 PM 7 comments:

Besides the mileage, I had a couple mental toughness runs this week. Wednesday I was in Solon Ohio (a suburb of Cleveland) at my remote office and set out for a run after work. The hourly weather forecast said 0 % chance of rain but there were rain showers popping up in the area. About 2 miles from the hotel, it started sprinkling which then turned into a moderate rain. No lightning and no SAG support so I kept going. A half mile later I turned around and started to head back playing the rationalization game in my head of "5 miles is close enough to 7". Then about 15 minutes later it stopped raining so I added 2 miles back on and hit the 7 on the plan.

Saturday I set out for my 14 miler about 10 am and it was already in the mid 80's with humidity just over 70% putting the heat index around 90. By mile 3 I was pretty much drenched in sweat and by mile 6 I was a little dizzy and started the rationalization game again. This time i was working on convincing myself that if I did 11 and followed up with 11 more on Sunday it would be the same as the planned 14 and 7. When I got to my first water refill point at mile 8, I poured a bunch of water over my head and started to perk up a little. 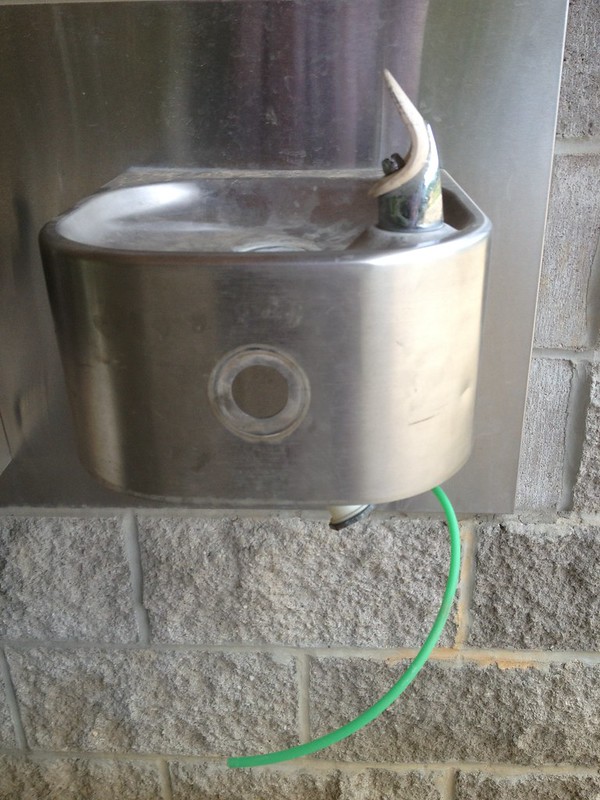 Luckily there is another fountain at this park. After cooling off, I figured I could make it the ~2 miles to the next park, do the water over the head trick. 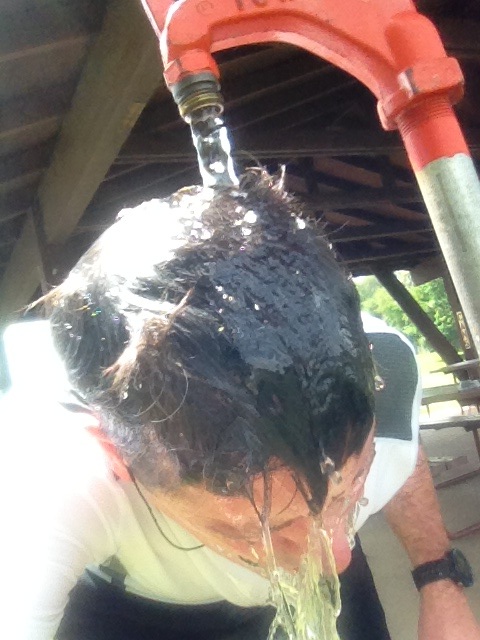 That felt so good. Now I was just past 10 miles and the heat index was in the upper 90's. Now I figured I could make it ~2 miles to the next water fountain and cool off again then make it home.

Shortly before setting off on my last 4 miles, my wife showed up on her bike to bring me cold water! How awesome is that? I email her a link to Garmin Live Track before every run mostly so that if I die of a heart attack, she'll know where to send the meat wagon even if some animals drag me into the woods :-). Anyway, 14 miles in the books.

The plan for Sunday was "just" 7 miles. It was a little cooler, but not much so I planned my route to end at the park with the cold water, then walk the 3/4 mile home to finish "cooling off". 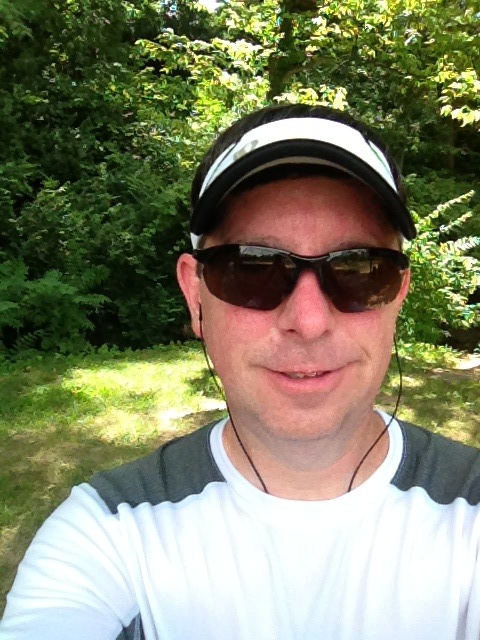 Broke out the visor for the first time this year.

Anyway, week 5 is in the books. Week 6 is a slight cutback week.

My friend Jill commented on my last post asking how training is going. The short answer is slow. Still trying the Maffetone thing and with all the variables, I can't really tell if it's working. The long answer will be a future post :-).

Posted with Blogsy
Posted by Ransick at 9:54 PM 5 comments:

Technically last week was week four though actually it was week three since I was fishing most of week one. I've decided to loosely follow the Hal Higdon Novice 2 plan. By loose I mean skipping one of the three weekday runs when I'm busy and biking instead of running for the shorter weekend run when tired.

Here are a couple pics from my fishing trip. 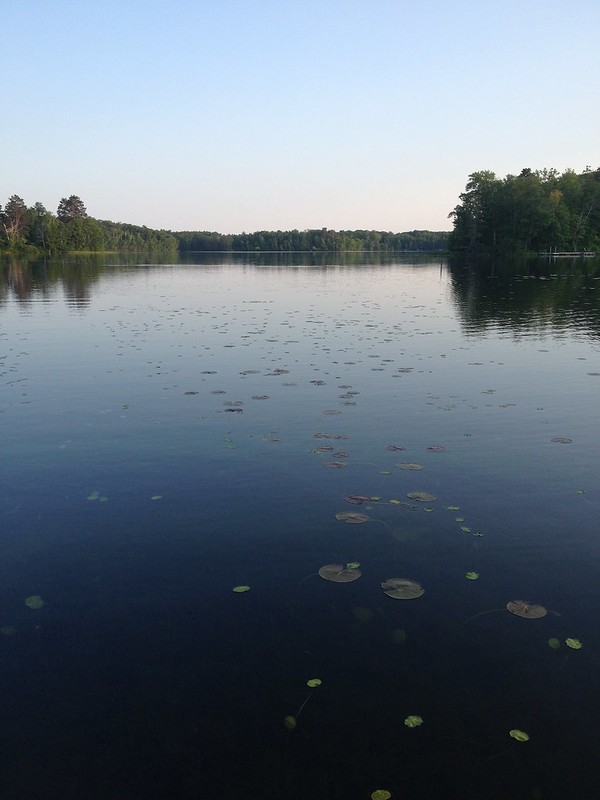 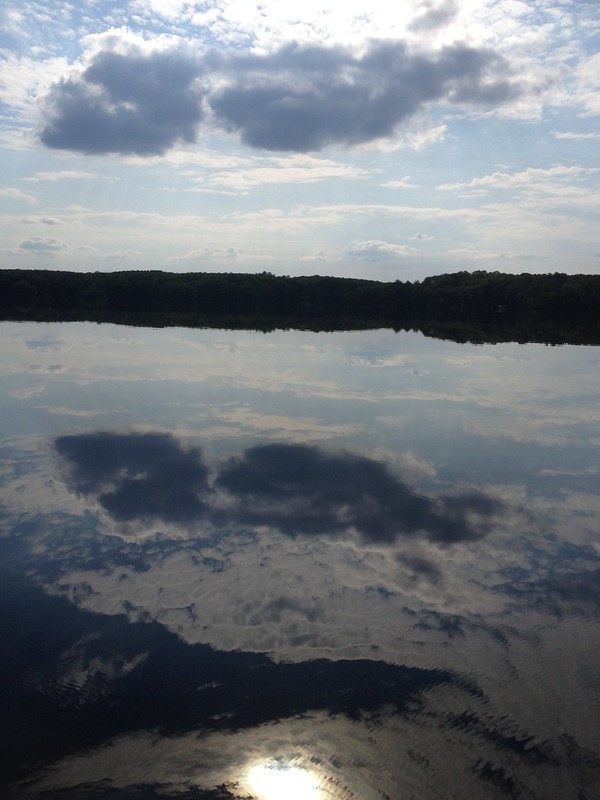 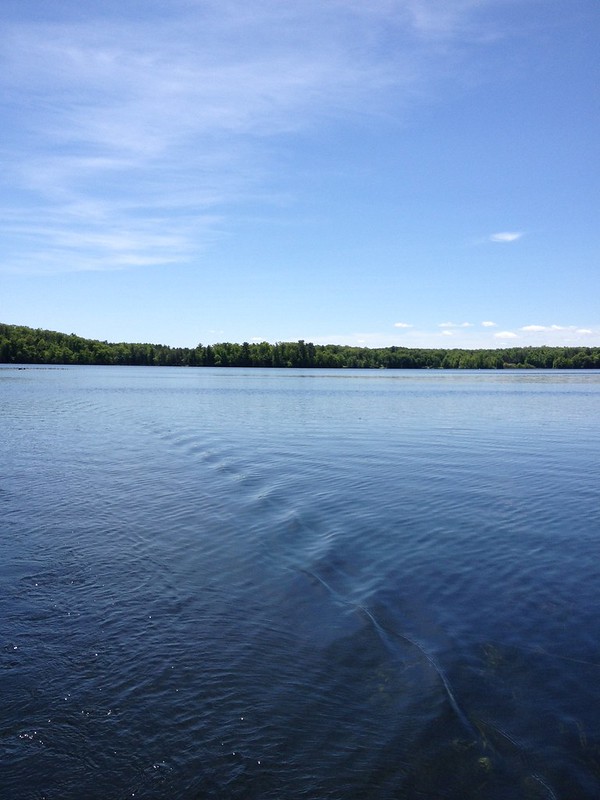 Fourth of July we had about 20 people over for a cookout before some neighbors did an impressive firework display (allegedly since fireworks are illegal in Illinois). I made steak kabobs using beef tendorloin and veggie kabobs. About 30 beef and 20 veggies. It turned out well (no left overs). 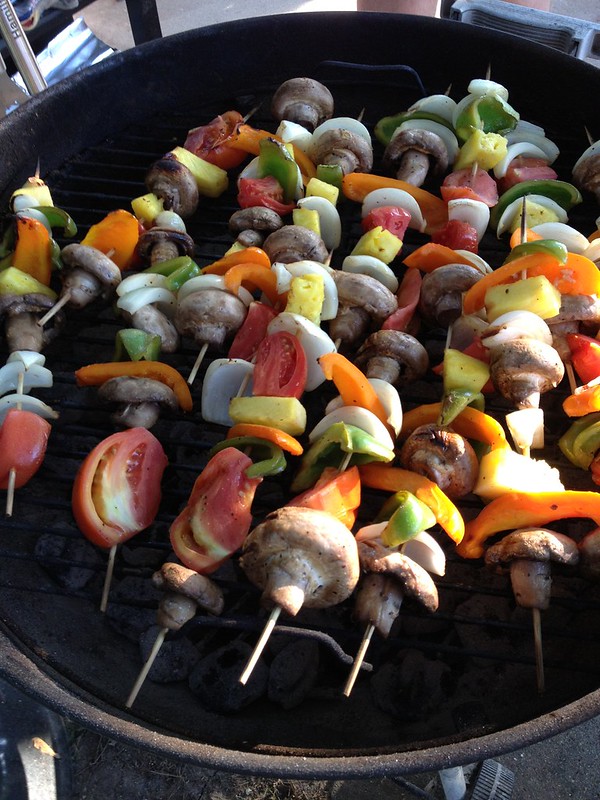 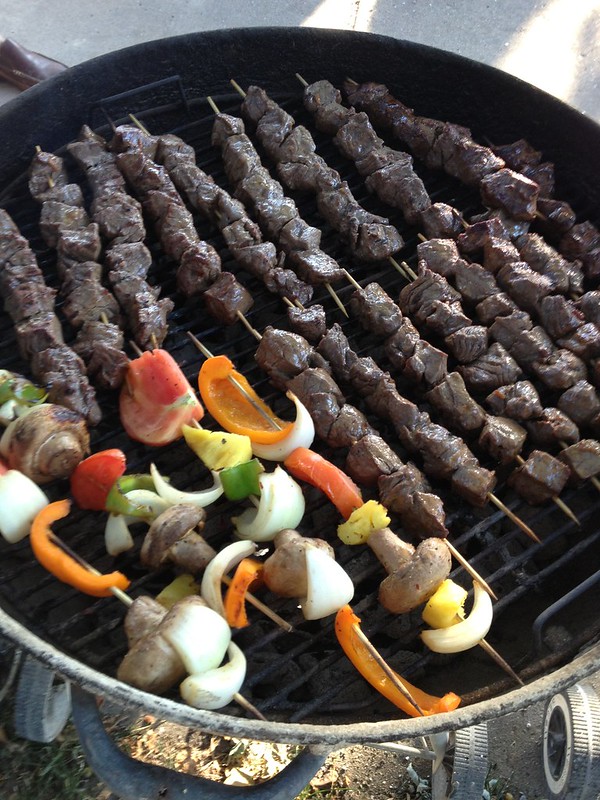 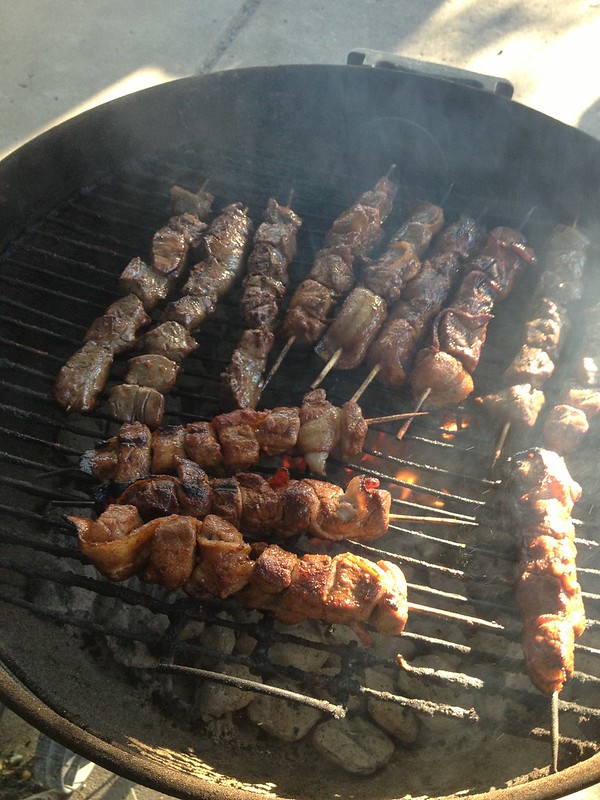 So, back to marathon training. The plan for last week (starting Monday) was 0-3-6-3-0-6-13. I did 0-3-6-0-0-13-6. Thursday was the day before the 4th so I went to happy hour with a couple friends instead of running 3 miles. I switched the long run to Saturday since it was cooler and more convenient. I woke up Sunday to those heavy sore legs that could use a spin,but ran instead. It wasn't pretty,but I loved being able to be out running given my Achilles has been acting up.

Posted with Blogsy
Posted by Ransick at 7:32 AM 5 comments: