We took the train from Alton Illinois to Chicago on Friday so we wouldn't have to mess with a car in Chicago. They were doing track maintenance between Alton and Springfield so we had to leave our house at 5 am and they bussed us up to Springfield. I swear the bus driver took every back road imaginable and it took forever. Turns out we could have driven to Springfield and gotten two more hours of sleep. Live and learn :-).

Arrived in Chicago, got some lunch at a pub across the street, went to the expo then we met a college buddy of mine and his girlfriend for some dinner. It was delicious and a great time catching up as always.

Saturday DW and our boy went to the Shed Aquarium while I did a two mile shake out run and met a friend and his family for brunch. Once DW and our boy came back from the aquarium, we did an architectural boat tour. Perfect way to do something cool while staying off my feet. 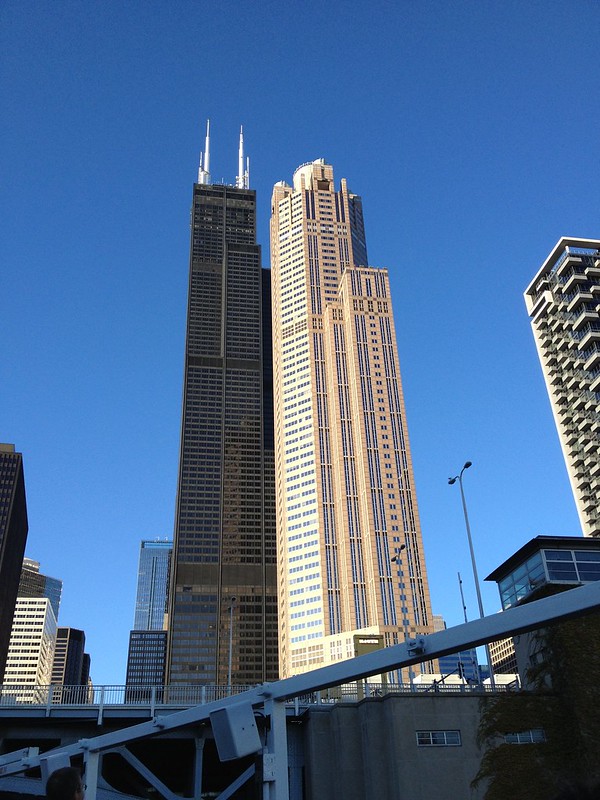 Lots of cool views on the boat tour

Race day I woke up at 4 am and ate yogurt and a banana, had a cup of coffee, and went back to bed. Woke back up at 5:45 for more coffee and race prep. Waking up early to eat works great for not having to hit the porta potties a bunch of times right before the race. Good thing too since the lines went on forever. Falling back asleep is surprisingly easy too.

The start line was about a mile and a half from the hotel and I didn't know how long it would take to make it through security, so I left the hotel about 6:45 am and walked to the start to make sure I was there in time for the 7:45 corral closure. I was hungry, so I probably didn't eat enough at 4 am, lesson learned. I was well hydrated and the porta potty lines were so long I decided to hold it and stop on the course. It was 50 degrees with a 15 mph wind at the start and I get cold easily. I had a throw away jacket over a short sleeve shirt and under armor plus gloves and a head wrap for my ears plus shorts. I brought two of those chemical hand warmers so I was all set. I also had two of those space blankets as back up and gave those to the first two people I saw that were wearing shorts and tank tops and shivering uncontrollably. They were very grateful to say the least. 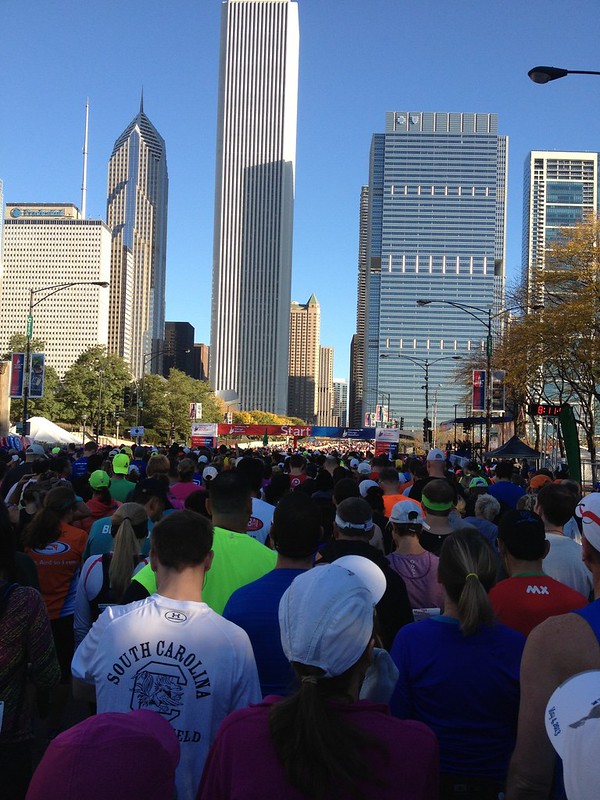 Moving toward the starting line 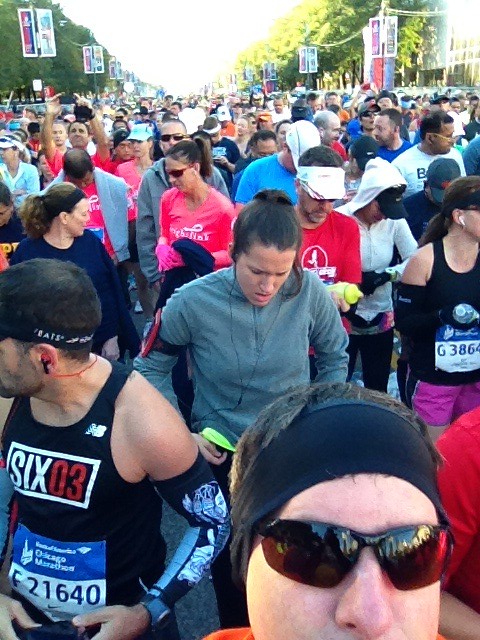 Just a few people behind me in the start corral

Once our wave started, it took almost 15 minutes to cross the start line and we were under way. The first 5k was uneventful. Just warming up, dodging people and keeping my heart rate in check. I drank two cups of Gatorade and two cups of water at the aid station (and every aid station until sometime after mile 15). More of the same on the next 5k except I made the first of three hydration relief stops. I was definitely well hydrated :-). I just focused on keeping my hr under 155, staying hydrated and enjoying the race with lots of high fives. Had my second stop about mile 10 and decided I didn't want to stop every 5 miles or this was going to be a really long race but I wanted to keep hydrating, so I did.

About mile 15 I let my heart rate rise a little to work toward a negative split, but not too high since there was still a long way to go. I ran without tunes and just enjoyed the crowd. I thought the racers would start thinning by mile 18 or so, but they really didn't. I managed to hold off on pit stop number three until mile 21. With five miles left, my feet and calves were starting to hurt, but that's to be expected. 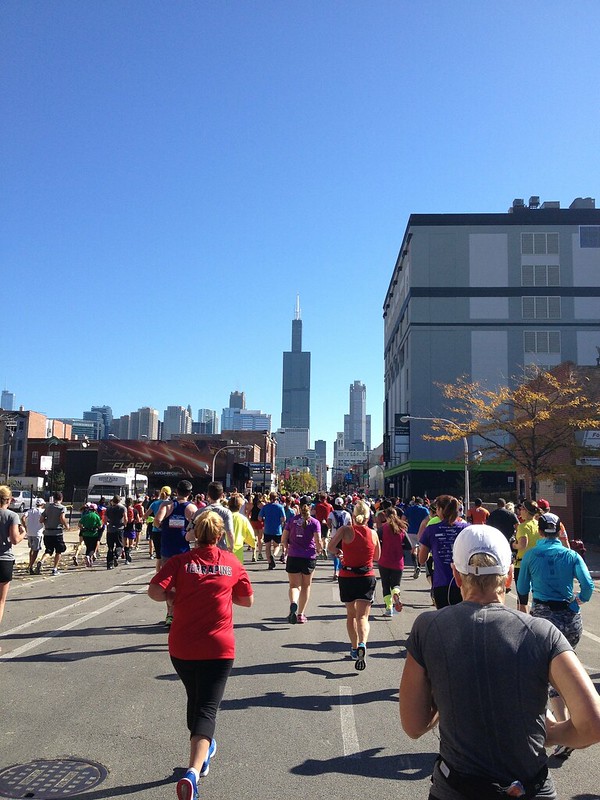 Can't remember what mile this was.

The last few miles, my calves felt like were about to cramp, so I kept drinking Gatorade and focused on keeping moving. I knew that if I started walking, it would be tough to get running again, so I kept running. The crowd support was great all day and really picked up the last two miles. I hadn't seen my family all day so it was nice to hear them cheering for me with about a mile to go. The last mile hurt, but I was happy to be running it in.

Once I crossed the finish line, it was a slow walk through the line for a space blanket, medal, banana, food, water and beer. It was too crowded to meet up with my family, so we met back at the hotel. I walked back to the hotel without too much trouble, showered then we went out for lunch. 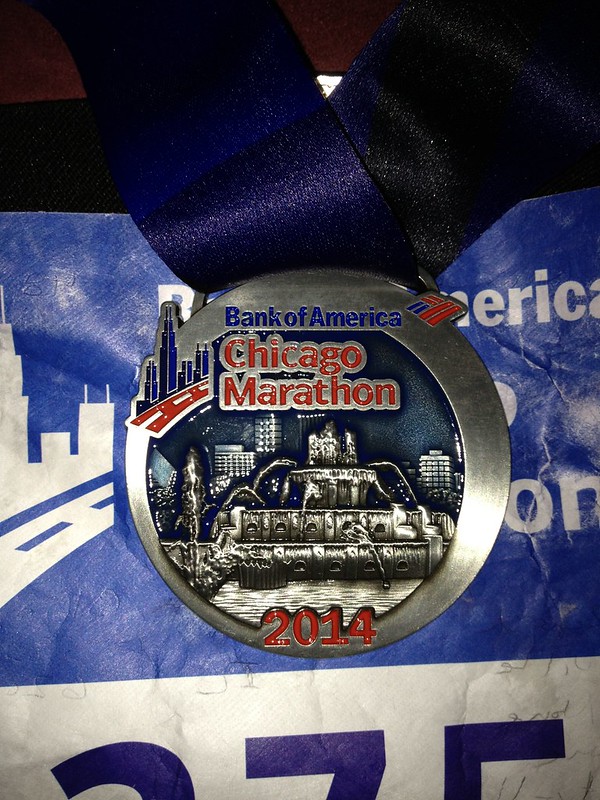 You can see the pits stops at 10k, 20k and 35k affected my time. You can also tell the lines got shorter each time. Having two pit stops in the first half and one I he second helped me negative split by about 4 minutes. My last 5k split was my third fastest of the day and my speed for the last 2.2k matched my fastest split for the day. I'd say I nailed my pacing for my current level of fitness.

My Garmin got confused in a few spots by the tall buildings and said I ran 27 miles. Looking at my Garmin map, it's clear I didn't run that far though I'm sure I ran farther than 26.2 due to dodging people, not always being able to take the best line through corners and veering off to grab fluid. Last time I did an LT test was four years ago.

I managed to keep my average HR under 155 for the first 15 miles in attempt to have enough left the run the entire way. Then I started to let it creep up to under 160 though mile 18 and 165 through mile 23. Then I tried to keep it under 170 for the rest of the race but my average for the last mile was 173 with a peak of 179, yikes! Guess if I didn't have a heart attack doing that, I'm good for another year :-).

Posted with Blogsy
Posted by Ransick at 10:10 AM

It's smart you had those space blankets to share- great way to make friends :) .
I'm impressed you can run that far and still keep it at recovery level before kicking things up.
Congrats to you!!

This is quite possibly the smartest, most drama-free race report I've ever read. Sounds like a great experience, Mike. And I love the accompanying pictures. Well done!

What a well executed race! It was so fun to stalk you online and watch you kick ass. It's great to come on here and read such a drama free race report like XLMIC said. Refreshing!

Great job Mike, way to stick to your plan!

Way to go, Mike! I was thinking about you during the race! I'm not at all surprised that you had extra emergency blankets...I remember your Boy Scout-level preparedness before the Lewis & Clark Half! :) So happy for you that your marathon went well. You earned it with that consistent training!

Glad you had a good race Mike! Awesome job on the pacing... it is especially hard at bigger races to get caught up in the moment/crowds/energy and go out wayyyyy to fast!! You pushed through those last painful miles at the end and nailed it!!

I do that double wake up on race mornings too:D

As good as it gets - congratulations!

Awesome job Mike! I was cheering for you from Slovenia :) Congrats!!

And cheers to you for keeping your heart rate down and pace consistent :) I always start off too fast, even when I really try to hold it back.

Well done Mike! Sounds like you ran a smart, controlled race and enjoyed it. The medal is nice this year!

Huge congratulations! Marathons can be such fun. Glad you had a good one. Any plans for another or too soon to decide?

Well, there's nothing like that first marathon (first of most anything, really ;) ) and I'm glad you had a positive one to look back on and reflect in the years ahead. Well done, very happy for you.

And I concur with Marcia - love the medal this year!

Congratulations Mike, sounds like you ran a smart race! Very cool about carrying extra mylar blankets. I am sure those cold runners really appreciated your generosity.