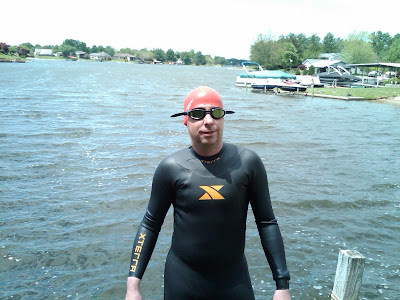 So my first tri is next weekend and all of my swimming has been in a pool. A friend's in laws have a place on a local lake and he offered to let me swim there. I was thrilled since swimming in open water for the first time at a race probably isn't the best idea. My main goal was to get comfortable in open water and wearing a wetsuit. The day was chilly. My friend stayed on shore in long pants, long sleeve shirt and a jacket. His mother-in-law wore a winter coat to watch the crazy wanna be triathlete swim in the lake when most boaters stayed home.
I put on the wet suit (the right way this time, I put it on zipper front when I first got it) and get ready to go. My friend was fantastic, he had a life vest in his hand and was ready to jump in and swim out to me if something really bad happened. The mother-in-law was fantastic. Showed me where I could shower when I was done, made hot coffee, offered me shoes to walk down to the dock, she was great. I walked down to the dock. My friend and the mother-in-law are cold. I feel good because stuffing yourself in to a wetsuit is a work out and I'm pretty warm. I measured the surface temp with a cooking thermometer and it at upper 60's. I was expecting upper 50's so that was nice. I get in and the water feels fine. I swam out and back a few times, tried a couple pair of goggles to see which one fit best, treaded water for a while, and basically just got comfortable. It was very calming though my form and sighting are going to be an issue in the race. With random waves hitting my face while breathing, I did take in some water. With the waves, I also wasn't able to streamline as much. And of course with no line on the bottom of the lake, I didn't swim straight. I can get better at all those things with practice. The main goal here was not to freak out, cramp up, have the heart rate go through the roof, oh yea, and avoid a heart attack due to the cold :-). 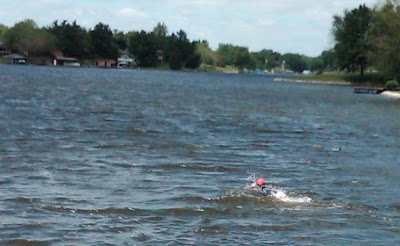 Head is too high, reach is too short, blah blah blah, I have work to do.

Once I got out of the water, I had some rolled up socks and my bike shoes laid out on a towel so I could practice the transition. I was breathing pretty hard, but managed to get the wet suit off with out too much trouble, roll the socks on, put on the bike shoes, then I was good, and getting cold quickly. My friend kept asking if I was cold, since he was cold while watching. I was in tri shorts and a tri top and very wet. I imagine I was in race mode because I didn't even think about being cold until after I was done with the transition, and I was breathing pretty hard. At that point I would be spinning away generating plenty of heat, so as long as the temps are above 55 or so, I should be fine until I cross the finish line. At that point, I will need to find heat fast.
Overall, it was a success. Thanks Craig! I owe you one.

Glad to help Mike! You inspired me to run my 1st 1/2, I'm glad to help you further down the trail... Good luck next weekend! - Craig