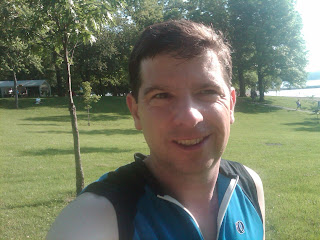 My second tri was not near the discovery process as my first one since I knew what to expect. In some ways it was more fun. I was much less nervous and I got to race with a friend I met through a tri forum, beginnertriathlete.com. 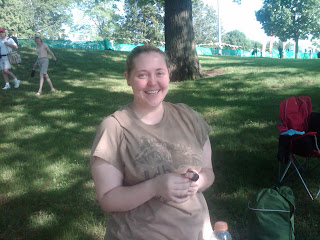 Cheryl jokes that I was going to see the guy I met on the internet :-). Funny, his wife made the same joke to their friends. Anyway, racing with friends is way more fun than racing solo in my opinion. I'll have more pics to post soon thanks to Ryan's wife Annie. Annie also rang a cow bell to cheer us on as we ran past. Thanks Annie! You are Awesome!--->>>
Once I get the race the race pics from Annie and Ryan, I'll make another post.

In some ways the second race was less fun. Cheryl couldn't be there so these pics were all by me. I had a cold all week and still had a sore throat and congestion race day. Luckily I didn't feel too achy or I was going to bag it and just root for Ryan.

The swim course was very nice and the lake had a nice beach. 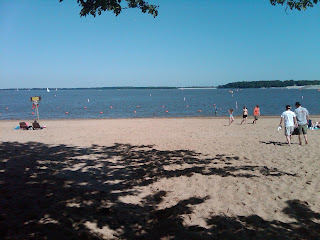 We were able to go out and swim the course the day before which is always helpful. My goal was to pace myself so I didn't have to stop and to sight better so I didn't swim extra yardage. I think I succeeded on both. It's hard to tell on the time since this race was a little longer and there was a steep hill to run up getting out of the water on the way to T1. 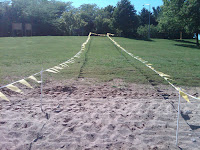 As I was running (shuffling/walking/trying to jog) I pulled the top of the wetsuit off and left my goggles/swim cap in the sleeve. My goggles and swim cap must have fallin out of my wet suit sleeve while running up the hill. $30 extra bucks for one race down the tubes.

The bike route was a flat out and back and just like last week, we had a good tail wind on the way out, and a stiff headwind on the way back. I averaged a little more than a half mile an hour faster than last week and my toes got less numb. The weather was much warmer so I don't know if moving my cleats back to the far back position helped or not. I've only been riding since January but, my toes would go numb even during rides on the trainer.

The run was brutal. Our wave didn't start until 9:35 and by the time we hit the run it was mid 80's, humid and the run was across a concrete dam, up a steep hill then down a hill then turn around and come back. It was like running in a sauna. I just kept thinking, it's only 5k, so I poured water on my head at every aid station to keep cool. I did walk up both hills which really hurt my time. I was 40 seconds slower per mile than last weekend. Last weekend, I was 20 seconds slower per mile than practice bricks. I guess the good news is I have some easy improvements to make if I bring my run fitness back to the 1/2 mary level I had last month.

Afterward, I was really hot and really glad I wasn't doing the Olympic distance race. In fact, both races I have thought the same thing. Doing a race for an hour and 20 minutes or so is one thing. Three hours or so is a different game. It takes me about two hours for a half marathon and the difference between a two hour race and a three hour race is gaining some respect in my mind. 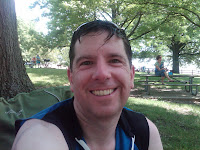 Much hotter but my smile is wider :-). I was spent though. I didn't want to move or eat. I just wanted to pour cold water on my head and drink water and Gatorade.
Posted by Ransick at 7:05 PM

There aren't any casino.edu.kg federal regulations on sports betting advertising, though states do have some power. Ohio, for instance, will quickly prohibit the phrase “risk-free” unless the sportsbook can truly back up that declare. Free picks, parlays and sportsbook presents sent to your inbox. Finally, a glance at|try} Live Now for stay scores and win chances, Best Books for impartial sportsbook evaluations, and Bet Center to see all your bets in one place.