I started following a plan this week to prepare for an Olympic distance tri the first weekend in September. It's funny how my view of training changes as I try things and get more experience. After about a year of ad hoc training, I was convinced that ad hoc training would be fine for Sprint and Olympic distance triathlons. After my first race in May, I still held that belief. My second race was a different story. The race was one week after my first and the temperature was in the upper 80's instead of lower 50's. The run was out and back across a dam. No shade and the rocks on both sides radiated heat like a sauna. I think I could have done the swim and bike portion of the Oly that day, but I would have blown up on the run. I felt ill after running the Sprint portion, I couldn't imagine running another 5k. 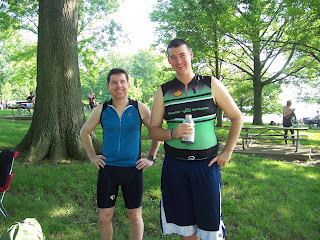 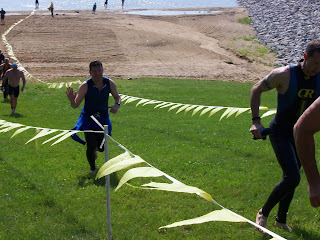 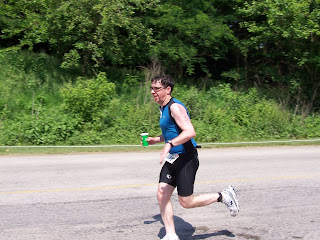 Here are some pics from my second tri. I raced it with my friend Ryan. We met through a group on BT and my wife likes to refer to him as "the guy I met on the internet" :-). Anyway, racing with friends is a lot more fun than racing alone. I need to meet some more triathletes. Yea, Ryan is tall and I'm short. I look really really short next to him.

The swim went much better than my first tri. I was much more confident and relaxed. I focused on swimming straight, having good form, and not going too fast. Out of the water we had a nice steep hill to run up. I left my goggles and swim cap in my sleeve and they must have fallen out when I ran up the hill. The bike was fast and flat with a strong headwind on the way back.

Shortly after that race I gave up on the idea of doing an Olympic tri at the end of July. I'm sure I could finish one, but I want to feel good when I finish. Feeling like death after a race isn't much incentive to keep racing. I picked a 12 week Oly plan from Beginner Triathlete and started this week. It is nice following a plan, it gives purpose to my workouts. The plan calls for 3 runs, 3 swims, 4 bike rides, 2 strength sessions and 3 core sessions per week. I'll probably skip the strength sessions since I don't need them :-). Just kidding, I'll skip them because I feel like a goof going to the gym because I am so weak. I know, I know, I should go to the gym to stop being so weak.