This week was a little out of sync due to the holiday. I did manage to get my hours in, but not exactly per plan. I had Monday off and decided to go for a long ride. Monday is normally a swim day but the Y was closed. I ended up riding 51 miles which is my longest ride yet. I felt pretty good and managed a run Tuesday morning and another 15 mile ride Tuesday night. Between the two rides, I had some chaffing issues and took care of those. Wednesday was supposed to be another swim day but I skipped and went out to dinner with my daughter and her friend. We checked out a new Korean place in town and it was fantastic! I need to do that more often. I also did my 4th tri this week (this morning). It was a little longer than a sprint (1100 yards/20 miles/ 4 miles). The lake was warm and this was my longest OWS to date by about 2X (I swam the course yesterday to get comfortable). The bike course was flat as a pancake and my goal was a 20 mph average, which I did!. The run was flat as a pancake, but I was dreading it because my run is just slow. It was rough but I won the mental battle and did not walk (even though many people were). 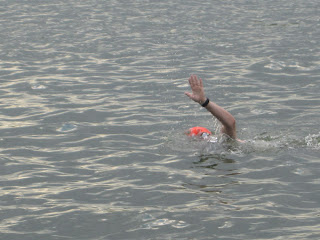 The swim was a TT start, with one swimmer every 5 seconds. I really liked that format vs. a wave start because there was way less bumping. In this pic I was waving at my daughter (kind of goofy:-)). 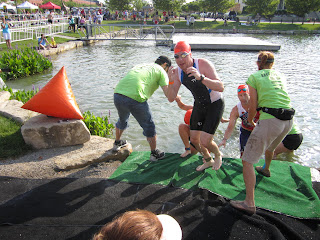 It was tough getting out of the water, but they had awesome volunteers grabbing everyone and yanking us out.

The bike was fast and flat. Tail wind at the beginning and head wind on the way back. I passed a bunch of people on the bike. It feels good to pass people 10 and 20 years younger than you. I also got passed by guys 10 and 15 years older than me, and they were hauling. They gave me inspiration that I can do this for many more years if I continue to train.

The run was rough. It was hot and humid, but the course was flat and I should be able to run faster. Right now I'm barely running faster than my April half marathon pace. I have another half marathon in October and will start ramping up my run volume soon, which will really help. Of course with X training hours in a week, something else has to give. Anyway, here I am crossing the finish line. 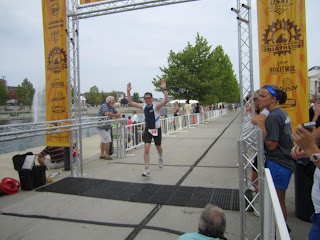 It was so cool to have my daughter there cheering for me.