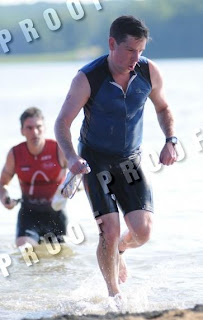 
The bike portion was so fun (hilly and technical), 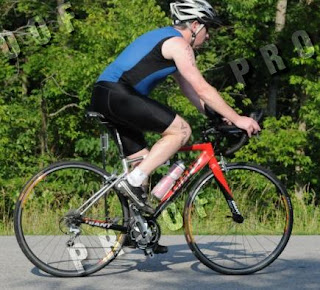 I signed up for two more tris. I'll be doing the tri in St. Charles MO next Sunday. It is about 2/3 of an Olympic distance (900 yards/20 mile/ 4 mile). The following Saturday, I'll be in Bloomington IL. The run and swim are sprint distances and the bike is Oly distance.

The run was hilly, hot, humid and tough. The race organizers had cold water and sponges at every mile. I learned the hard way that cold water = side stitch. My run time was not pretty. My pics in general aren't pretty. 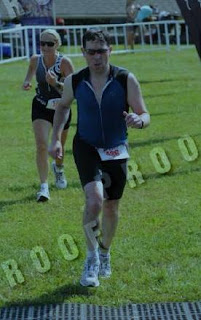 I lost a bunch of weight and still have a few lbs more to go. The end of the run was funny. I heard someone huffing and puffing coming up behind me. I had no idea if is was a man or a woman, but I worked hard to hold them off. It worked and I managed to avoid a finish line pic of me being chicked :-). It was painful as you can tell from the look on my face.

So week three, was a tough week. I was tired early in the week due to the increased training volume. Tuesday night I helped at a fund raiser my daughter put on to help the animals in the gulf (she raised almost $2k!). She is 18 years old and decided to do this on her own. I'm really proud of her. Wednesday night was a happy hour. I managed to make up a missed swim Friday night. Didn't get to make up a missed bike ride. Oh well, weekly hours weren't too far off. I ended up at 1.9 hours of swimming, 3.4 hours of biking, and 2.1 hours of running including an all out run TT. It was painful, but now I know I can run 4 miles with my HR over 180, in the heat, and not have a heart attack. Now if I could just get the Dalai Lama to grant me total consciousness on my death bed, I'll be in good shape :-)
Posted by Ransick at 10:35 PM