Lewis and Clark Half Marathon

Today was my third half marathon. This was the 9th and final time for this run. Next year it will be a "Rock and Roll" half/full marathon. I read "more expensive" run.

I ended up driving my friend Tom (who needs a blog) and his friend Kate . This was her first half marathon and she did it in under two hours. Way to go Kate! Small world, Kate is the sister-in-law of a woman I work with that is also getting in to running. 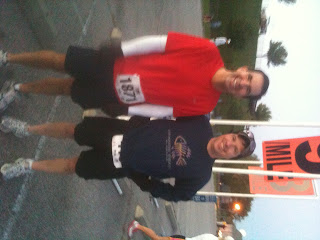 Tom is on the left. He took off at the start and I never saw him again. He beat me by six minutes! Way to go Tom!

I trained pretty well for this run and was hoping to beat my last HM race (1:58:21). It seems like I should be able to run faster than that, but that's a different story. This course is pretty flat and the weather was cool. Actually a little on the cold side for me. It was lower forties with a pretty stiff 10+ mph breeze. I almost wore running pants but posted a question on BT and was set straight. Dress 20 degrees warmer than the outside temp. So, I wore shorts, a long sleeve compression shirt, a short sleeve tech shirt, a throw away sweatshirt and throw away gloves along with my Pearl Izumi ear guards thingies. It was great hanging out with people I knew before the race. Tom and Kate met up with some friends they met through the daily mile website for tracking your training. I log on BT but I've heard good things about daily mile. I may check it out.

Back to the race. I had no idea how I was going to pace myself for this race. I just started running and logging my miles using my stop watch (I don't have a Garmin). I heard a couple people with Garmin's calling out paces and I was going a little fast, but that was expected at a race. After three or four miles I found a small group running consistent 8:45 miles. Perfect to hit my goal time of 1:55. So the run was uneventful for the most part. I didn't run with music and I ran alone. The crowd support and volunteers were great. Lots of signs, plenty of water stops, nice course. I high fived some little kids along the way. I felt like a rock star :-).

I ditched the ear warmers about mile two, gloves at mile two and a half, and the sweatshirt at mile three. Running into the wind was a bit cold, but I guess better cold than hot. About mile five I had some left foot pain, but it went away. Every twinge you feel running is a bit concerning since you never know if it will get worse or subside. About mile seven I felt my glutes getting tired, I really need to strengthen them. I was still holding 8:45 - 8:50 miles and feeling pretty good. At mile ten I tell myself, just a five k from here. Everything is holding together, heart rate is going up a bit, but that is to be expected. This is the first race I watched it and it wasn't as scary as I thought it would be :-). With two miles to go I started feeling serious fatigue in my glutes, but with two miles to go, I just tried to keep my pace up. A mile to go and my pace group started pulling away. I couldn't keep up. They were holding a casual conversation the whole way, so they ran it much easier than I did (and beat me handily). One mile to go, everything held together. Tired legs, but my strongest finish yet! 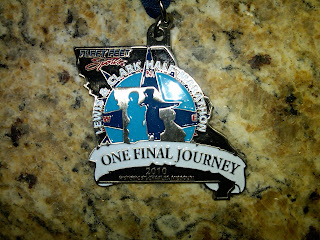 Great write-up, and great race! You did a good job keeping your pace steady after that first mile. Definitely a small world. No wonder my SIL speaks highly of you! Very nice to meet you. :)

Nice splits, constant all the way. Especially the 8:48 between those two 50’s, nice! Why not invest some more time in trying to figure out heart rate based training. I really think it can do you a lot of good. It’s also a perfect way to getting to know and understanding your body better. There’s tons of stuff out there (Google away). Anyways, what is your next goal from here?

Kate - It was great to meet you too! We need to get your SIL out there to do a half next year.

Bas - I've been doing a little HR training research. I did a couple LT tests this year so I know my zones. I have a lot more to learn about it.

Next up for me? I think I'm done for the year. Most likely New Orleans 70.3 in April.