I finally gave in and went to an Orthopedic surgeon Monday for my shoulder.  After 10 physical therapy sessions plus dozens of home and gym workouts, my shoulders still aren't right.  When I swam last, I stopped after 500 yards due to pain in my right shoulder.  I guess that is progress because I quit swimming in July due to pain in both shoulders.  So the ortho took an x-ray of my right shoulder, looked at it for 5 seconds and said my Acromion bone is longer than normal which leaves less room between my Humerus and shoulder than most people.  The Acromion is the bone on the top outside part of the shoulder. 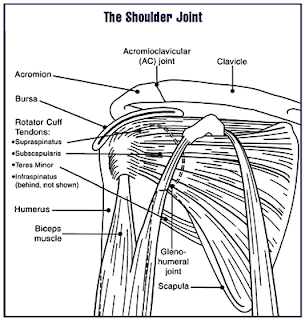 He said it's just luck of the draw.  He also said there is an 85% chance Cortisone and physical therapy will fix it and a 15% chance I need surgery or to become a duathlete.  He then put a Cortisone shot in my shoulder.  I didn't watch, but he told his PA, "look at the sharp angle I have to use to get the needle under the bone".  The shot didn't hurt at all but my shoulder got sore as the day wore on.  In the morning, my shoulder felt loose, really loose, like all the inflammation was gone and nothing was holding things in place.  I seriously worried my shoulder was going to dislocate while drying off after my shower Tuesday morning.  As Tuesday wore on, the looseness subsided and my shoulder felt normal again.  I was going to try it out Wednesday night at the pool but ended up going out for a business dinner.  I had another business dinner Thursday and blew off a couple of runs.  Not a great training week.

85% chance of success is enough to motivate me to do more PT on my own.  I really don't want to make the surgery/duathlete decision.  Neither appeal to me, at all.  I'm an average athlete at three sports which probably puts me at below average at two.  When thinking about surgery, I can't help but think of the health care systems issues.  I really don't need to swim, so I really don't need surgery or PT.  I really want to swim, and with the help of insurance I will be able to at some point.  So do I deserve to be able to swim?  Can I argue that I "need" to be able to swim to keep me motivated to stay in shape?  Maybe I should just eat chips, drink beer and watch TV until they make a TV show about me :-)

I did start getting a bit down about this issue this week.  It's been going on for some time now and pretty soon I need to get back in the pool to get ready for spring.  I'm trying to reassure myself that this too shall pass.  After all, when I started training for my first half marathon, I develop IT Band problems on my right knee.  I wore a strap around my right leg just above the knee for several months and carried it in my pocket on long runs for many more months just in case.  I stretched my IT band every day for a long time and the issue eventually went away.  I also developed plantar fasciitis which gave me bad heel pain (this was self diagnosed pf).  I found a home treatment that involved standing on softballs.  I bought a couple at Walmart and would roll them around under my feet while on the computer and put pressure on the tight spots.  Standing on them at first was excruciating to the point of almost crying.  After a while I built up a tolerance to it and after a few months, no more heel pain. Oh, and lets not forget the first time I rode a rode bike.  I ended up seeing my doc, a urologist and having two ultrasounds of my undercarriage.  Maybe I should just eat chips and watch tv.  Getting my middle aged body in shape to do triathlons has been a real challenge.

So the plan is to stick with PT and Cortisone until there are no other options.  It's going to be a long swim in April if this doesn't work.  It is going to work.

Training this week was a little light due to a couple of business dinners and deciding to sleep in a couple days.

Next week training will be light too.  I'll be in Moldova.
Posted by Ransick at 11:56 AM

Re: the health care system issues. I think that surgery (if it comes to that) or PT are cheaper options than gastric bypass, heart disease, diabetes, and all those other things that are exacerbated if not caused by lack of exercise. Ooh. And when you add the cost of therapy because you are so depressed about sitting around instead of competing...yes, fixing the shoulder is well worth it. :)

That said, with the issues that have cropped up with each new type of exercise, maybe you should rule out the decathalon. ;D

Kate - No decathlon for me. That right there is funny!