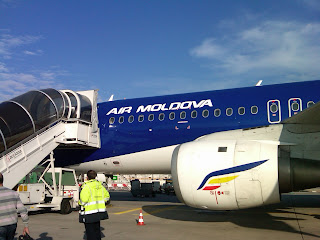 ﻿﻿﻿﻿﻿﻿﻿﻿
I was in Moldova last week on business.  I was a little uneasy at first since this is a former Soviet area that declared itself an independent state in 1991.  The trip itself was long, but uneventful.  We flew from St. Louis to Chicago to Frankfurt to Moldova.  Total travel time was about 21 hours.  I arrived at the St. Louis airport about 3 pm Sunday and we arrived at our hotel at about 7 pm Monday.  Moldova was 7 hours ahead of us while I was there, it is normally 8 ahead of us.
The hotel was built in 2001 and was very nice.  The rooms were huge and very clean.  The wireless internet worked perfectly.  The staff spoke good English and were very pleasant.  No complaints at all.

The company we are working with picked us up at the airport and had a driver for us at all times.  I'm glad because I wouldn't want to drive there.  The driving isn't as crazy as Brazil, but it is fast paced.
The people were overly kind to us.  They made sure we had everything we needed at all times.  They fed us like kings and were just generally pleasant.  I've noticed this "overly kind" trend repeatedly with people from other countries.  The people in Brazil treat us in a similar manner.  People I've worked with from Germany are the same way.  They go out of their way to make sure we're taken care of.  Americans on the other hand, are what I call "selfish kind".  We take our guests out and make sure they have what they need, but we are in more of a hurry to get home.
The food was delicious.  We had Zama, the national soup, along with solyanka, a delicious Russian soup.  We had Russian black bread, some local pickled vegetables, and crepes with cheese or meat in them.  We had a Turkish lamb dish which was very good.  Somehow they made the lamb taste like a beef roast instead of gamey.  One night, we went to a hunting restaurant and had wild boar and wild rabbit sausage.  I had venison for dinner and it was cooked to perfection.  They kept bringing more and more food out until we couldn't eat anymore.  Moldova is big into wine, so we had plenty of wine.  They are also proud of their vodka (of course) and Cognac.
The weather was very similar to St. Louis though they are 10 degrees north of us latitude wise, so their winters are about 15 degrees colder than ours on average.  It's fall (leaves changing and falling) and the temps were mid 50'sF for a high and mid 30's F for a low.  Very pleasant.  People there dressed like they were very cold.  They kept the office and cars very warm.  I was sweating almost all the time unless I was outside or in my hotel room.  I turned on the A/C in my hotel room to counteract the radiator heat that I couldn't turn off.


I brought my running gear but decided not to run.  I didn't feel unsafe, but I didn't want to call any attention to myself either.  It seems like more people smoke than not in Moldova and I didn't see one runner while I was there.  I heard from a friend, I shouldn't leave the hotel without an escort.  Our business associate told me I could run as long as it was in the morning and I stuck to the main street.  The main street was very busy with people and traffic, so it wouldn't have been a relaxing run anyway.
I didn't see much architecture.  Most buildings were damaged in World War II and during Soviet rule, many large public housing units were built.  The roads were horrible. 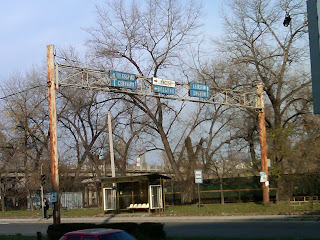 Everywhere we went it was constant bumps. We did get a tour of a really cool winery.  60+ miles of underground tunnels with 34 of them used to store wine.  We drove through it and saw huge barrels where the wine sits before it is bottled, then rows and rows of shelves containing 2 million bottles of wine.  Very impressive. 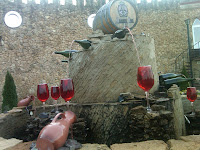 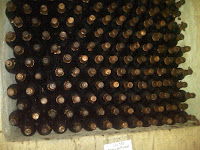 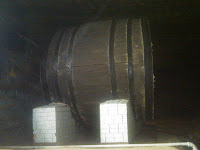 Moldova is a growing country with a mix of old and new.  This photograph is a good example.  A very old car next to a new Mercedes. 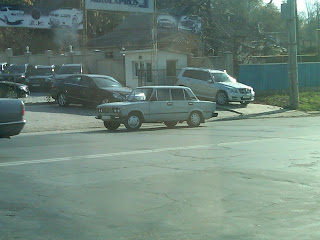 It was very interesting to hear about the Soviet times and how everyone was the same.  Same pay, no reason to excel or work hard to get ahead.  Now there is a lot of opportunity for people that thrive on change.  Things are worse for people that liked Communism.  It was described as things used to be grey, with everyone being equal.  Now there is hope, but there is also a wide gap between the haves and the have nots.
﻿﻿﻿﻿
Training this week
﻿﻿
0 hours swimming
2 hours biking
1.1 hour running

Very cool trip report. I'm sure traveling for work gets old, but it sounds great to someone who normally doesn't get to go any further for work than Belleville. :)

Regarding how extra nice your hosts in other countries are, to me that kind of goes along with how most (many) people in other countries are multilingual, while here we're lucky to know two languages. It was embarrassing to me when we were in Mexico that I couldn't speak the language...and frustrating that I could've given the answers in French! :)