We leave in a day and a half so I started packing.  I decided to make a list and take some pictures at the same time.  They are a little blurry, I think my camera phone has some sweat on the lens.

For the swim, I'm hoping it is wetsuit legal.  The lake is getting warm!


I'll wear the top and shorts for the bike and run too.  I'll wear my hr monitor (not shown for the entire race).

For the bike, I'll choose airflow or aero:


Yes, those are mountain bike shoes and I'm running spd pedals.  I was going to buy road or tri shoes and new pedals for this race but put the ~$250 towards the Xbox I bought so I could play COD on the trainer.  I'll buy tri shoes later this season or next season.  I forgot to show socks and a small towel to wipe my feet, I have the socks pre-rolled so they go on to wet feet easily.

I forgot to add socks here too.  I'll have a fresh set if I feel like changing them.  I probably won't.  I just bought the visor this week.  I like running with a hat on but it's been cool here so I thought a visor might be nice for NOLA.

Pretty minimal list.  All the things that go in transition, plus race day items, will go in one bag.  My daughter bought me a nice big Nike bag last year for Father's day.  The wetsuits, along with a garbage bag for the dirty wet suit, plastic grocery bags to ease getting the wet suit on (put each foot in a plastic grocery bag and it slides right in, same with your hands), along with some wet suit cleaner go in another bag.  All the spare stuff goes in a third bag.  Regular clothes and travel stuff goes in a suitcase. 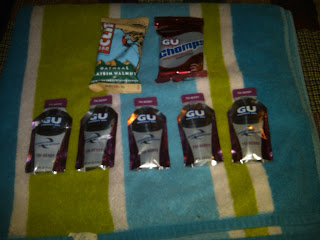 Plan on the run: two or three GU's (in race belt or jersey pocket) 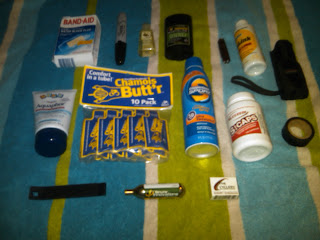 
I think that is all.  Did I miss anything?

Oh and if nursing my shoulders and now left foot just trying to get to the starting line isn't enough, I got in a wreck on the highway on the way to work. So it's pretty normal on I270 north of St. Louis to go from 60 to 5 mph rapidly then back to 60.  Everyone slows down as fast as possible, but not too fast so you don't get rear ended.  Sometimes you have to swerve a bit, but that is mostly to let the guy behind you know this is a more serious slow down than normal.  Check your speed.  Today was no different until the guy in front of me clipped the right rear bumper of the car in front of him spinning him out into the cable restraint system.  This guy left the highway half way and would have hit the oncoming traffic head on had it not been for this system.  The system chewed his car up pretty good and directed him back on to the highway sideways at which time I tried to squeeze between him and the car next to me and didn't quite make it.

I love my car and take great care of it.  It's an '03 with 111k miles on it and people think it's only a couple years old.  They are shocked it has over 100k miles on it.  You can see, I missed by about a foot to the left and two feet forward.


You can see his front end was in the median and drug a bunch of dirt up with it as he was propelled back on to the highway.  The back end on the right side was mashed when the car in front of me hit him.  The driver was lucky, the cables probably saved his life (he said the same thing to me).  They did a number on his car though. 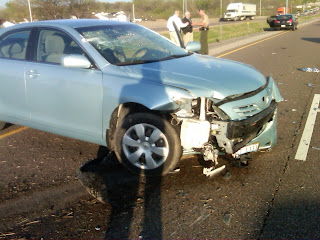 My driver side quarter panel hit somewhere in front of the tire.  I had nothing to do with the rest of the front end, the cables chewed that up.  In fact, if you zoom in, you can see on the hood where the top cable scrapped up the hood then busted his wind shield.

Relax!! You know, that kind of relaxed where you're still on top of things. But remember...this is fun (maybe more so after it's over). It's an adventure. And no matter what, it'll be a good story...bc you know that's what it's all about.

you tri people always have so much gear to haul around.. good luck

So, how did the race go?