Had quite a scare this week.  I went in for a routine physical because I turned 45 this week.  All the normal stuff, blood pressure is under control, took some blood to run all the standard tests, and did an EKG.  That's when things got scary.  Some voltage ratio was outside normal limits and indicative of an enlarged heart.  Crap!  My immediate thought was, "What about NOLA?", "What about training?".  Using my twisted male logic, I didn't tell my doc about the race.  After all, if she didn't know about it, she probably wouldn't tell me not to do it, right?  My doc ordered an echo cardiogram to investigate it further.  When my wife asked what the doc said about racing, she wasn't too thrilled with my logic :-).

I did explain to my doctor that I averaged 5 hours a week of exercise last year and I'm about 7 hours per week so far this year.  My doctor said exercise usually doesn't cause this.  I still held out hope since she probably has few triathlete patients.  I did some research and sure enough, I could have athlete's heart.  So off I went to the cardiologist yesterday and got an echo cardiogram.  I resigned myself that if the doc said no to NOLA, I would still go and volunteer.  I also would get a second opinion from a doctor that treats athletes (I'm pretty slow, so calling myself an athlete sounds funny to me).  I also printed my exercise graph from the last 15 months to plead my case that I can race. 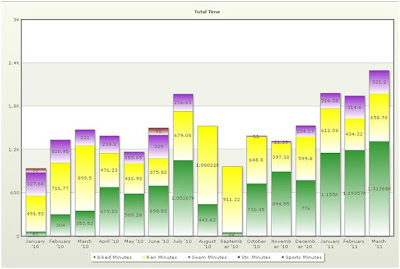 ﻿
I'm pretty proud of this graph since I went from very little exercise to this and to be honest, I don't know anyone that exercises this much except for my online friends I've made.  After looking at the logs of some people training for Ironman races, this graph is less impressive (but still quite a feat for me).

I called the doctor's office today and asked if my results were in because a I have a 5 hour workout this weekend and a long race in two weeks and I need to know if it is safe to do this.  They called back after a couple excruciating hours and said, minor enlargement and wall thickening, but perfectly normal function.  I'm cleared to exercise.  Woohoo!  I did schedule an appointment for next week to go over the results in detail and maybe mention NOLA.

Blood tests were good in general but my cholesterol was a little high at 226, but the doc wasn't to concerned because my good cholesterol is 86 (more than double the normal good level), and my triglycerides were 56, under 150 is normal.  She did say my vitamin D is low and I figured that because everyone I know that has done blood work lately, gets the same result.  There must be some pharmaceutical company pushing some new supplement.  I'll see if I can get some natural source, like cod liver oil.  And my calcium was high.  She said just don't take any supplements.

So it was a scary week with a good outcome.  NOLA here I come!
Posted by Ransick at 5:40 PM

This blog is nice and amazing. I love your post! It's also nice to see someone who does a lot of research and has a great knack for ting, which is pretty rare from bloggers these days.
Thanks!
Blood pressure

Hi! I love how informative and great your articles are. Can you recommend any other Food Blog Names or blogs that go over the same topics? Thanks a lot!