Run failure (and other failures)

I expected a tough run today, but not a failure.  If I look at the timing of events leading up to the run, it really isn't surprising though.  I usually do my long runs Saturday morning but had a cycling race yesterday.  I also couldn't get out there until about 2 o'clock this afternoon since I volunteered at church early this morning.  When I left the house the heat index was 102 and when I returned it was 109.  I also picked a route with no shade (on accident, I wanted the water fountain 4 miles out, forgot about the shade).  I was planning on running eight miles but 2.5 miles in, I gave up, turned and walked 2.5 miles home.  I did do one thing right.  I brought a frozen water bottle that was nice cold ice water when I quit.  I'm pretty sure I made the right call since I got dizzy a couple times on the walk back.

The race was a cycling and eating race called Tour de Donut .  I deciding not to eat any doughnuts and to hammer the ride.  I used it as a nutrition test to see how my stomach would handle my liquid nutrition (Infinit) while racing hard.   I took a couple pictures on my work phone but I guess I didn't store them (failure #2).  The phone is a Palm Treo Pro and I don't like it.  My Blackberry is still broken from sweating all over it last weekend (failure #3).  I ordered parts to try to fix it.  They were supposed to arrive yesterday, but the mail man didn't deliver to our house for some reason (USPS failure :-)).

Anyway, for the race, I met up with my friends Kate, Kristy. Craig, Lynette, and their son Mason.  I never saw my friend Anne, but found out she took second in her age group with the donut adjusted time (she ate 11 doughnuts)!  We also met up with our tri club and spent some time under their tent. You can read Kate's RR here.  She knows how to work a camera so there are pictures :-).  We started several hundred riders back so it took a while to reach the starting line and several miles before I could really get moving.  Next year I'll start at the front with the tri club.  Once I got moving, it was hard to find people to draft off of since the faster people were already ahead of me.  Oh well, I train alone so I'm used to no drafting.  The course was nice, except for one bumpy stretch of road, the volunteers were great and the crowd was wonderful.  I felt like a rock start waving at all the people cheering as I passed :-).  I ended up 94th out of 1391 finishers and averaged 19.6 mph.  I didn't check my doughnut adjusted time (you get 5 minutes off for each one) because I didn't eat any.  I was 27th out of 232 in my age group so over a quarter of the top 100 were in my age group.  I felt strong during and after the race so the 1700 miles I've biked so far this year are paying off.  I do want to take my biking to the next level and get up to a 22 mph average.

After the race was a driving failure (failure #4).  I backed my car into Kristy's mother-in-law's car (failure #4).  What's worse is my bike and Kate's bike were on my bike rack.  I was so ticked at myself.  I held it together in front of the ladies but I was so mad I wanted to scream!  What a doofus.  Funny thing is we had just talked about backing into other car's in the driveway since I've made that mistake before and so has Kristy.  Ok, I'm done kicking myself about it and ready to move on.  It looks like my bike just has a bent front wheel..  Kate's bike has two bent wheels and hopefully that's it.  We'll see.

Ever feel like things just aren't going your way?  Besides the failures above, while getting ready for my run, I kicked the cat's water bowl and sloshed water all over the floor and in his food bowl making a soggy mess.  Arrrgghh.

Now that I got all my complaining out of the way, I took Tuesday off from swimming and took my son and his buddies to the Cardinal's game.  I'm not a big baseball fan, but I do like to go once in a while (when I get free tickets).  The field is always so meticulous and the new stadium (ok, it's 5 years old now) is beautiful. 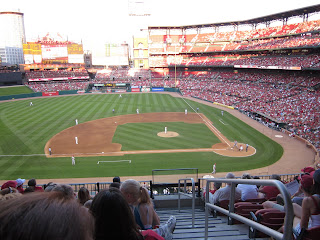 OK, that picture of the boys is hilarious. Is the one in the white shirt your son? That's my guess since my kids would refuse to smile for me while their friends might actually humor me.

And on a day this hot, I think the failure would've been to keep at it. It was ridiculous out. You were smart to walk home.

I felt sooo bad about the cars. Ugh. What a lousy end to a fun morning. You kept it together really well.

Sorry about all the little pieces of bad luck, though I'm not going to call them "failures", except for the USPS one, they can be terrible.

Love St Louis. Every time I've passed through (which is probably 12 or 13 times now) I go up the arch. One of my favorite structures.

Great post.....and not because of all the failures. You just wrote it all down quite comically;))
Good job on your Bike Tour;) (And yay for not eating any doughnuts....I think. I would have been tempted;)

I can't imagine running in that kind of heat- so it's amazing to me you even ventured out!!!!

For some reason I have "TAKE ME OUT TO THE BALL GAME"....running through my head:)

Believe it or not, the thing that really jumped out at me was kicking the cat's water bowl. Little things like that always seem to foreshadow what the day will be like. Running (or anything else) mid-day is brutal right now. Congrats on a solid bike ride!

I don't think you can call that run a failure. Running in the heat is disastrous no matter what. It simply wasn't your fault. :)

Hope the bikes are OK!

Sorry about the bad run, Mike, but sounds like bagging it was the right decision. It was dangerously hot out there yesterday. That sucks mightily about the car/bike. That is a huge fear of mine. They really had the cars packed in closely on that field, we were very fortunate in that by the time we left, the person in front of us was gone so we didn't have to back up. I suspect you are not the only person who had trouble.
But wow, what a great time you had! Sounds like your nutrition plan worked and you are ready for Evergreen!

you're on a roll man. don't sweat the lousy string of luck.
good luck at the Oly this weekend!
~B
(getsome)

Tough run in the sun, we've all been there! Very wise choice calling it a day when you did...heat stroke can be a bitch.