No races planned for August.  We have our yearly beach vacation in early August then back to school time plus no good local races I know of.  I wouldn't mind a sprint or oly at the end of the month if it works out.  Any ideas?  September 10th I have a 5k run with my daughter which will be her first race.  I'm really excited about it!

My original plan for the second half of the season was to do the Last Chance Tri half distance tri at Rend Lake, IL on October 2nd.  After looking into the race a bit more, it looks like a nice course and the 1863 folks put on good races.  Then I looked at the results from last year and less than 60 people did the race.  That sounds like a lonely bike and a really lonely run.  Couple that with the $170 entry fee and a night or two at a hotel plus food and it's a $500 lonely race.  To take the place of that race, I'm toying with the idea of a private HIM starting from my house instead.  Kind of crazy idea, but when you go on long bike rides without tunes, these kind of crazy ideas happen :-).  I live across the street for an extensive trail system for the bike and run and two blocks from a YMCA with a pool.   T1, T2 and the aid stations would be in my front yard (meaning a lot of run loops).  Post race food would be grilled by me, once I finish.  Corn won't be in season, but I'll come up with something else good.


Here are couple pics from the tentative bike course. 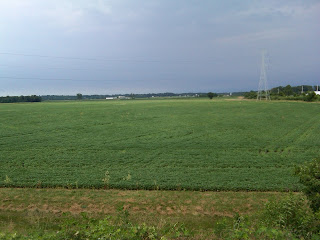 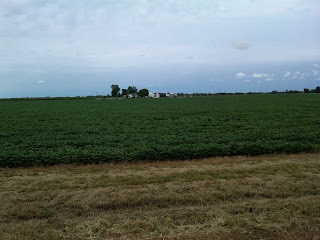 If you are interested, let me know (I'll need to limit the entries due to the cost of dinner).  I might even have some shirts made, or a shirt if I'm the only taker :-).  Oh, and I've become a fair weather racer, so if the weather sucks, you can race and I'll start the cookout early.
Posted by Ransick at 9:54 PM

That sounds like a crazy great idea! Can we have staggered starts? Bc dinner will be long eaten before I get done with the swim. Who knows, maybe we could get some family interested in crewing? Loops would be good...at least we could cheer each other on. I love the idea.

The entry fees are out of control, aren't they??? It's hard to justify more than a handful of races per year because they are so expensive.

I AM IN!!!! I wonder how much airfare would be to get to your place.
Seriously- that is one great idea!!!!!!
Hey! I'm racing with my son mid-August on a 10km night race...his first 10k distance. I talked him into the idea...I told him i would pay for registration AND.....the fee comes with a free headlamp as the race is at night:) So he agreed:)))
Love it when we can get our kids involved...even if it is a wee bit of bribery.
I want to check into airfare now....

That sounds interesting. I am in no kind of swimming shape though. Keep me posted.

If you build it they will come. I've heard about 1 or 2 unofficial triathlons in the Long Beach area in the last year, after they've happened though....but people more in the know than me turned up.