After a week of productive meetings in China, another Chinese colleague and I headed to Beijing Friday afternoon.  We stayed at a hotel overlooking the site of the 2006 summer Olympics.  Very cool place to stay for sure.  The "bird's nest" (Olympic stadium) was closed for touring but the water cube was open.  Pretty cool that it's open to the public not just for touring but to swim!  The main pool is 9x50m lanes and people just like me were out there doing their laps.  There was also a 6x50m warm up pool open for lap swimming.  Very cool.


Pretty sure the smog was pollution.  I had a slight burn in my eyes and the back of my throat in Beijing and in Shanghai. 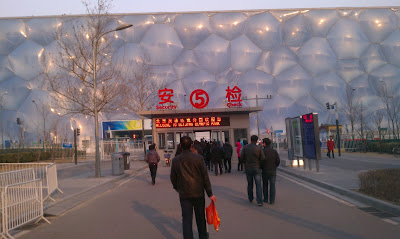 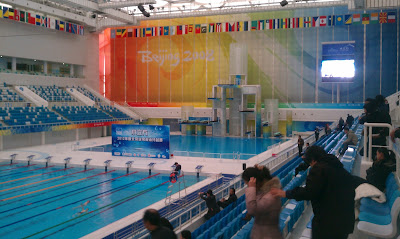 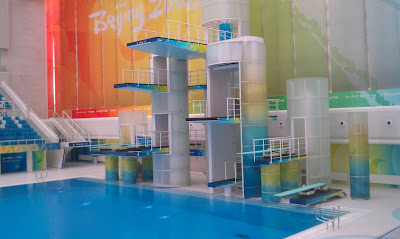 After walking around the Olympic park for a bit, we took a cab to Tiananmen Square .
We couldn't walk on the square because Congress was in session and it was roped off.

Saturday morning, we took a cab to the Great Wall.  It was cold, 20F with 30 mph winds, but that kept the crowds down. 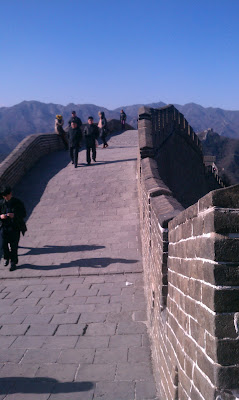 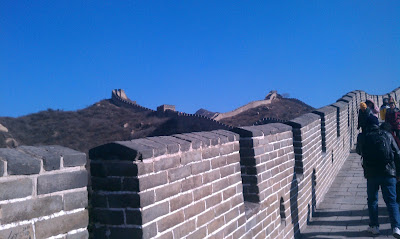 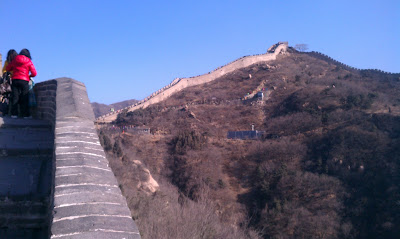 After the walk on the Great Wall, we headed to the airport where our flight left at 5 pm Saturday and after 13 hours of flying, landed in Chicago at 4 pm the same day.  Kind of Matrix like :-).

What a great trip!  Besides being productive for work, I was able to see two major cities in China.  Very cool.  I also used chop sticks for lunch and dinner all week and while not an expert by any means, I didn't starve :-).  I guess eating sushi with chop sticks a couple times a month actually turned in to something useful.

This is TOO COOL!!!! The pics of the water cube and the Great Wall are amazing! What a neat experience!

If I went to China I would carry a spork with me at all times.

That is so cool. How great would it be to train in that pool?

Wow - the wall is absolutely on my bucket list! I love that the water cube is open to the public!

What a neat trip. Cool to get to do a little touring when on a business trip.

Seeing the Great Wall must be unbelievable. That pool is just a wee bit different than the one I swim in!

Very cool. Nice photos, thanks for posting them. It so cool that you got to swim in the pool. Is that located in the olympic village?

That trip looks so fun! Glad you got to use work as an excuse to play. Adam and I try as much as possible too =)

Wow. Very cool. I love the pictures, especially the ones from the wall.

Kate is sending me to you with this question.

I am not a good swimmer and feel the added buoyancy of a long might help but have also read the arms can restrict your stroke.
Thoughts?

I have always wanted to see the Great Wall. Now my kids want to...and there is a marathon on it too! (I am thinking this would be a great family thing :) centered around running) Great photos! The smog- i hear it's bad there and that the sunset is always bright because of it.

More awesome pics! Thanks for sharing.

I missed this post while I was away in Iowa...those are incredible pictures!! I've always wanted to do the Great Wall of China Marathon, it looks kinda hilly though. bleh. :)